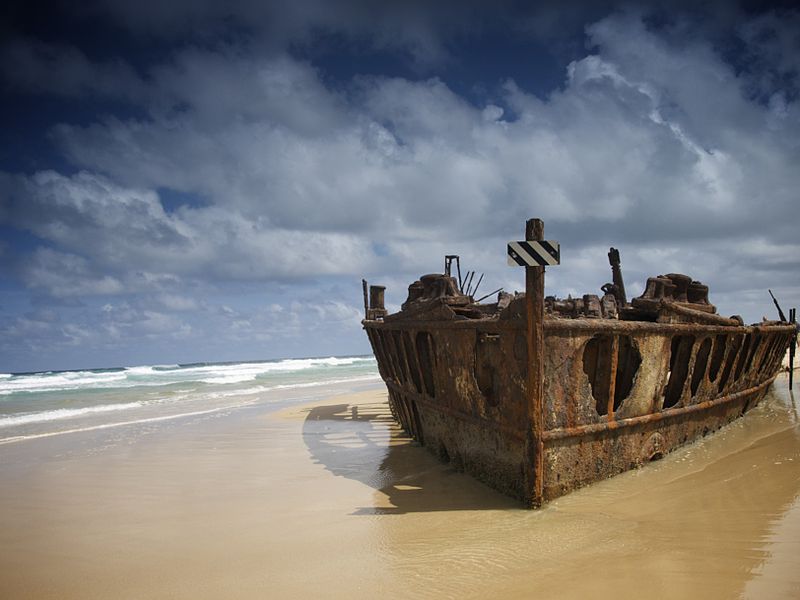 Standing at the foot of the one of the tallest trees I’d ever seen, I crooked my head heavenward, squinting towards the sun’s rays sneaking through the canopy above. I could just about see the top of the tree. It was a big one, and one of many on Australia’s only sand island – Fraser Island.

I spent some time wandering around the trunk of this immense tree, looking for an answer in the entwined mess of vines surrounding the dead core as to how it came to be, or what type of tree it was. Baffled, I sought out our guide for the trip around the island, who divulged how these majestic giants begin life and grow. Strangler figs, like the trees pictured above, typically begin life as a seed dropped onto the high branches of a host tree. The fig sends prop roots down to the grown, which thicken, interlace and eventually join, gradually strangling the original tree. Over time, the host tree rots away completely, leaving behind a hollow cylinder of the living fig’s roots. Looking up through the hollow core of a Strangle Fig.
Image: Prashanthns

Once I was able to tear myself away from the figs, I joined the rest of the group, who by this stage had practically galloped onwards. It’s the one problem I have with tours, they’re always too fast. While I adore being fed brilliant facts and insights, I like to take time to cogitate things so prefer to meander and see a little, rather than race through making sure everything is ticked off a list.

Still, taking a guided tour of Fraser Island is very much worth it. It’s such a unique place. Where else would you get rainforests, giant ferns, swamp vegetation and eucalyptus trees growing on sand dunes 200 meters above sea level?

Sand Dunes and The Pinnacles

Part of the Great Sandy National Park, Fraser Island is the biggest sand island in the world, measuring approximately 120 kilometres long and about 24 kilometres wide.

The island has been formed over millions of years, with sand impacted upon a bed of volcanic rock. The sand has come mainly from far south-east Australia, but it’s thought that much of the sand accumulated before the landmass that became Australia and Antarctica split.

Plant and Animal Life on the Island

Plant life is plentiful here because the sand contains naturally occurring fungi, which releases nutrients in a form easily absorbed by plants. It’s strange to wander through the dunes and see so much colour and vegetation.

It’s even stranger to see a wild dingo sunning itself on the beach. This was my first and only sighting of a dingo. They’re obviously used to having people around because it sat for some time before sloping off into the bush.

The native dingo population on Fraser Island are said to be the purest breed alive today, but their numbers may be dwindling as sightings have decreased in recent years.

Other mammals found on the island include, swamp wallabies, echindnas, possums, sugar gliders and flying foxes. There are 74 different species of reptiles and over 350 recorded species of birds on the island, making it a mecca for nature and wildlife enthusiasts. Forty perched dune lakes, including the world’s largest – Lake Boomanjin – are dotted around the island. These lakes were formed when organic matter, such as leaves, bark and dead plants, built up and hardened in depressions in the sand dunes. Rainfall and run-off water collect in the basins and slowly filter into the watertable below. These freshwater lakes, and a number of clear water creeks, provide a cool escape when the weather gets too hot to handle. Lake McKenzie, near Eurong, sits around 100 meters above sea level and is probably one of the most popular for visitors.

Lake Wabby is a little harder to get to, so is less crowded. The constantly shifting dune alongside the lake is slowly encroaching and will probably swallow it completely in about 100 years. Lake Wabby, the deepest lake on Fraser Island.
The little dots on the beach are people, to give you an idea of proportions.
Image: Peter Joel

Called K’gari by its Aboriginal inhabitants (the Butchulla people), the island shows evidence of Aboriginal occupation of at least 5,000 years. First thought to be heavily populated by Aboriginal people, research has since suggested there was a small permanent population of around 400-600, which swelled to 2,000 – 3,000 seasonally, when seafood resources were abundant on the island.

There are a number of sites with historical, social and spiritual significance to the original inhabitants of Fraser Island. Hiring an Aboriginal tour guide to show you ‘their’ side of island life will make a trip to this phenomenal giant sand system truly unforgettable. How to Get to Fraser Island

Both vehicle and pedestrian ferries leave Hervey Bay, River Heads or Rainbow Beach on the mainland. Each ferry lands at different locations on the island, so double-check you get the right one.

How to Get Around the Island

As Fraser Island is just sand, sand and more sand, 4WD vehicles are essential, as is knowledge of what to do when you get stuck in a rut – quite literally. Sand highways run along the coast, which is great if you’ve never experienced driving on sand before, it feels a little bit naughty. I will admit to a severe yearning to bust a burnout, but, like everywhere, Fraser Island has a highway code too, so keep your rally-driving skillz in check. One of the main highways on Fraser Island.
Image: Sensenmann

Places to Stay on Fraser Island

There are a number of hotels, apartments and campgrounds on Fraser Island, with budgets to suit all wallets. Eurong Beach Resort and Kingfisher Bay Resort are among the most popular choices for travellers. They have rooms or private villas and large open-planned indoor and outdoor communal areas, both with great swimming pools. If you’re seeking something smaller, Sailfish on Fraser has nine self-contained units near Seventy-Five Mile Beach. They also have a swimming pool, BBQ facilities and it’s child-friendly.

Always book in advance as accommodations on Fraser Island are limited. Fraser Island is not a place you can just rock up and expect to find a bed for the night, and sleeping on the beach is not an option – unless you’re happy to share your dinner with the dingoes! *PASSPORTS WITH PURPOSE CLOSED FOR NOW. CHECK BACK NOV 2014*

Chance to Win a Short Break on Fraser Island

If you’ve never been to Fraser Island and now have a yearning to see more of this beautiful natural habitat, don’t forget to check out the prize Eco Traveller Guide has a arranged for this year’s Passports with Purpose. The goal is to raise $115,000 to help buildOn construct schools and fund adult literacy programs in Mali, Africa.

One of the many amazing prizes on offer is a three-night stay on Fraser Island, with transfers and a wonderful full-day eco tour, provided by HotelsCombined and Mercure Kingfisher Bay Resort. Please have a look at the post published last week for more info about this prize, or head straight to Passports with Purpose Prize Catalogue to make bid and donate.

Header image: The wreck of the SS Maheno by Majkelx via Wikimedia Commons