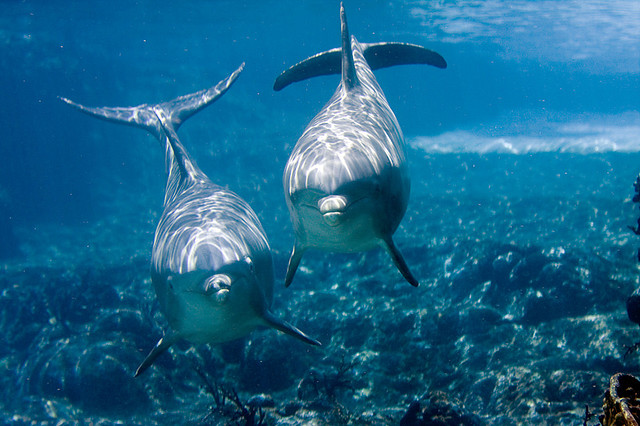 When I tell people I swam with porpoises over vacation, they don’t wait for me to tell them the rest of the story before they fill in the details themselves.

Suddenly, in their heads, I am either the pipe-smoking father of an ’80s nuclear family petting a tame and labrador-stupid dolphin in a Seaworld tank, or a skindiver holding the fin on an ocean roller coaster beneath the surface of Photoshop-blue water, my snorkel bubbling away like a streamer behind me.

Neither of these is what it is actually like. If anything, it’s closer to Jaws. It was eight AM, and I was watching my grandmother play solitaire on her iPad after taking a quick morning dip in the ocean. I never caught the end of my aunt’s sentence that began with “Look, there are porpoises…” as I bolted off the deck, but as my feet churned the morning beach into sprays of sand, I could only assume she was going to finish with something like “…out where the obvious fins are, past the breakers,” and not “…on the coloring book I found for you!” (which, with my aunt, was a distinct possibility.)

I hit the tide at a run, Baywatching my way over the knee-high water until I was far enough out to dive, and then threw myself headfirst into a swim sprint to the horizon. The waves were low, and each time I popped over a crest, I could see a gray fin disappearing into the distance a little further away than it had been.

I pressed on, far past the breakers, into the calm water, but each reconnaissance yielded fewer porpoise sightings.

They were swimming away. No need to push all the way to England for nothing, I decided, and slowed to a lazy tread. And as I was catching my breath, no further than a short-bus-length away, a gleaming gunmetal body surfaced, blew a plume, and vanished again. And I suddenly became very aware of a number of things.

The thing people underestimate is our years of Hollywood training. Although I know that there is literally nothing to be afraid of, decades of dumb movies slam back to you in an instant, and you begin to notice things. Things like, the shore is very, very far away. The water is so murky that I can’t even tell if I have toes. And that I am alone, for hundreds of meters to hundreds of miles in all directions – alone, that is, except for the glittering tubes of solid muscle invisibly reveling unnervingly close to me, and revealing themselves with a wave of a fin that my blockbuster-conditioned mind tells me looks an awful lot like a shark’s.

I thought I had been looking for them as I swam out, peering above the waves, but as I bobbed and waited for the next breach, I became uncomfortably aware that I was no longer watching them – they were watching me. The sonar of cetaceans is so powerful they can essentially see through your body. I couldn’t even see my feet, and they were watching my heart beat out its nervous drumroll under the water.

I was in their world now, and it was no mistake that out of the entire shoreline to swim in, they were close enough for me to hear each plume. They were investigating me. I was sunburned, muscularly tired, comparatively weak, mostly naked, and even at my best I would still be completely at the whim of these three very smart, very strong, and very wild animals. I floated at the surface as they spiraled invisibly around me, paddling slowly in place. The water would be unbroken for what felt like minutes, and then close by in my peripherals another fin would cleave the waves. I had no idea where they were, or if they had gone, before another playful tail would slap the water to my side. And then finally, as I waited for another, the minutes extended and the surface remained still, and I realized I was alone.

The Price of Our Wonder

The world is alive, brilliant with the entwined lives of millions of species, but the idea of an inanimate landscape is something incultured into us as we grow up around great cities and man-made marvels – machines built to do our bidding and only exactly what we command them to do. They will not move unless we direct them to. They will die without our fuel.

Roads lash the country to the earth we inhabit like great granite webs, and cars travel these veins like cells, washing through mountain passes in days that a century ago were impassable.

I don’t know how a computer works. I trust it.

If I was thirsty, I could go inside, and with the turn of a handle, an unimaginable labyrinth of steel pipes beneath my feet would deliver a cool cup of clean drinking water into a glass.

As I watched the sun set later over the endless condominiums stretching along the coast out of sight, I realized with a touch of sadness that I could barely picture a beach unmarred with the warts of civilization.

The wonders that mankind have created have allowed us to live lives that divorce our physical needs from the difficulty of obtaining them – food, water, are but a car trip away – but our dominance over nature has come at the price of our wonder. The Earth no longer represents a living, gently breathing giant – and if it does, it is as Gulliver, tied on its back by thousands of miles of electrical cord, highways, and shipping routes. We mine away its essence and transmute it into deadly chemicals, which we spray into the air and the water in which we live and depend. We mindlessly wipe out entire species to eat, and move on to the next, callously and systematically collapsing entire ecosystems.

Something to Tell the Grandchildren

With any generational knowledge, we could realize the difference, and correct our mistakes. But, myself included, we are born into a generation cleaved from our mother. Water comes from a bottle. Food comes from McDonalds. Where else would it come from? We have no knowledge of any other way of life.

And now I’ve told you a story about swimming with porpoises, and you are thinking how lucky I am to have done so, when decades ago whole pods of dolphins and porpoises would match pace with fishing ships and clippers and race alongside, celebrating the glory of life in the sea.

Now, we stay inside, and those who go outside are shocked by the realization that the earth is even still covered with glorious nature.

Now, most of this biodiversity is ancient history, spoken of only in stories. I will likely tell my grandchildren of the time I swam with porpoises, before the poisoned sea choked them into death, and only photos and stories remain, to be heard but not learned from. And it occurs to me that if I had told the first people to land on this beach that in a few decades, their children’s children wouldn’t be able to remember a landscape not crammed with houses – that they would spend most of their days sitting inside a box, staring at a glowing screen – that most of the species that existed then would by now no longer exist, and few people would know, and fewer would care – they may have returned to their ships, and left.

The Glory of Nature

I think back often to those first explorers, creating human footsteps in the sand after months of ocean voyage, no true knowledge of to where they were sailing or what they would find, if they would find anything or even ever see their home again.

I imagine the world that they placed foot upon, and the thrilling trepidation they must have felt, seeing naked land, dunes and grasses extending across the earth on each side. They existed as a bubble of survival, nursing the land for each meal and each cup of water, with each day greeted as a further boon of life. But as they stood alone on that same beach, shivering in the wind, I imagine they felt as I did on the ocean that day, blind to the world beneath – that feeling of being dwarfed to nothing, the thrill of entering the void, the frailness of one’s body compared to the grandiose and the glory of nature, as an unseen great wildness observes, and beckons from the woods.